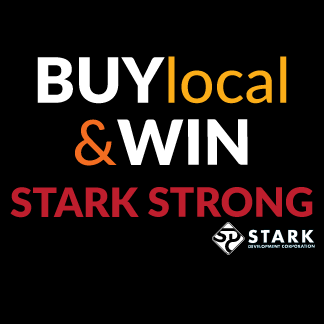 The following are basic rules governing all contests conducted by Stark Development Corporation (“SDC”). In the event that no other rules are published for a particular contest or promotion, the following rules will apply. In some instances, rules for individual contests and promotions may conflict with these rules in which case, the individual contest rules will take precedence over the basic rules. All contests are void where prohibited by law.

Prize(s). The prize(s) that may be awarded to the eligible winner(s) are not transferable, redeemable for cash or exchangeable for any other prize. Prizes are only redeemable through participating Stark County, ND businesses. Participants must provide valid and accurate contact information. If a winner cannot be contacted or is disqualified for any reason, SDC reserves the right to determine an alternate winner or not to award that winner’s prize, in its sole discretion.

Eligibility and Limitations. Participants and winner(s) must be U.S. residents. Each Participant shall have one contest entry for every dollar spent in Stark County, as documented by a sales receipt showing a taxable purchase from a business located in Stark County, North Dakota, for a purchase occurring between Sunday and Saturday of the week preceding that week’s contest drawing. Each purchase shall be for a minimum of Ten Dollars ($10.00). Purchases in excess of Five Thousand Dollars ($5,000.00) will be limited to a maximum of 5,000 individual entries. SDC reserves the right to review, verify, and disqualify non-eligible receipts at its sole discretion. Only one (1) prize per household for the contest. Participants much be Twenty-One (21) years of age or older. Employees of SDC, and members of the immediate family of any such persons are not eligible to participate and win. The term “immediate family” includes spouses, siblings, parents, children, grandparents, and grandchildren, whether as “in-laws,” or by current or past marriage(s), remarriage(s), adoption, co-habitation or other family extension, and any other persons residing at the same household whether or not related.

Entries. Only entries submitted at the website designated by SDC with forms provided by SDC may be used to enter the contest. Winner will be selected at random from all eligible entries received. All blanks must be filled in accurately or entry may be considered ineligible.

Tax. Any valuation of the prize(s) stated above is based on available information provided to SDC, and the value of any prize awarded to a winner may be reported for tax purposes as required by law. Each winner is solely responsible for reporting and paying any and all applicable taxes related to the prize(s) and paying any expenses associated with any prize which is not specifically provided for in the official rules. Each winner must provide SDC with valid identification and a valid taxpayer identification number or social security number before any prize will be awarded. Any person winning over $600 in prizes from SDC will receive an IRS form 1099 at the end of the calendar year and a copy of such form will be filed with the IRS.

Publicity & Use of Personal Information. By participating, where allowed by law, all participants and winner(s) grant SDC exclusive permission to use their names, characters, photographs, voices, videotape, and likenesses in connection with promotion of this and other contests and waive any claims to royalty, right, or remuneration for such use. By participating in the contest, where allowed by law, participants agree that SDC may disclose personal information obtained from participants in the contest to third parties and use such information for marketing and other purposes.

Disqualification; Fraud. Failure to comply with any published contest rules is grounds for immediate disqualification from the contest. SDC reserves the right to disqualify any entry not conforming to the rules of the promotion at any time. SDC and its contest and promotional partners assume no responsibility for entry fraud committed by any entrant. In the event it is determined that an ineligible entrant wins a prize, SDC reserves all rights to the ownership and return of the prize and all costs associated with remedying any prize award to an ineligible entry or entrant.

Misinformation. SDC is not responsible for undeliverable, lost, delayed, misdirected or misaddressed email or any other issues regarding the electronic delivery of the contest form. This includes, but is not limited to, the speed at which your email service routes email through the internet. The sole determiner of eligibility for the final drawing will be the time the email or entry form is received at our offices.

Release. By participating in the contest, each participant and winner waives any and all claims of liability against SDC, its employees and agents, the contest’s sponsors and their respective employees and agents, for any personal injury or loss which may occur from the conduct of, or participation in, the contest, or from the use of any prize. In order to receive a prize, participants must sign an official waiver form provided by SDC.

Conduct and Decisions. By participating in the contest, participants agree to be bound by the decisions of SDC personnel. Persons who violate any rule, gain unfair advantage in participating in the contest, or obtain winner status using fraudulent means will be disqualified. Unsportsmanlike, disruptive, annoying, harassing or threatening behavior is prohibited. SDC will interpret these rules and resolve any disputes, conflicting claims or ambiguities concerning the rules or the contest and SDC’s decisions concerning such disputes shall be final. If the conduct or outcome of the contest is affected by human error, any mechanical malfunctions or failures of any kind, intentional interference or any event beyond the control of SDC, SDC reserves the right to terminate this contest, or make such other decisions regarding the outcome as SDC deems appropriate. All decisions will be made by SDC and are final. SDC may waive any of these rules in its sole discretion. Any attempt by an entrant or any other individual to deliberately circumvent, disrupt, damage or undermine the legitimate operation of this contest is a violation of criminal and civil laws. Should such an attempt be made, SDC reserve the right to seek civil and/or criminal prosecution and/or damages from any such person to the fullest extent permitted by law.

Miscellaneous. Void where prohibited. Odds of winning depend upon the number of participants. SDC may substitute prizes, amend the rules or discontinue the contest at any time as announced. SDC disclaims any responsibility to notify participants of any aspect related to the conduct of the contest. All entries become the property of SDC and will not be returned.

Compliance with Law. The conduct of the contest is governed by the applicable laws of the United States of America, which take precedence over any rule to the contrary herein. SDC shall follow the applicable laws for conducting contests, as required by local and state law.